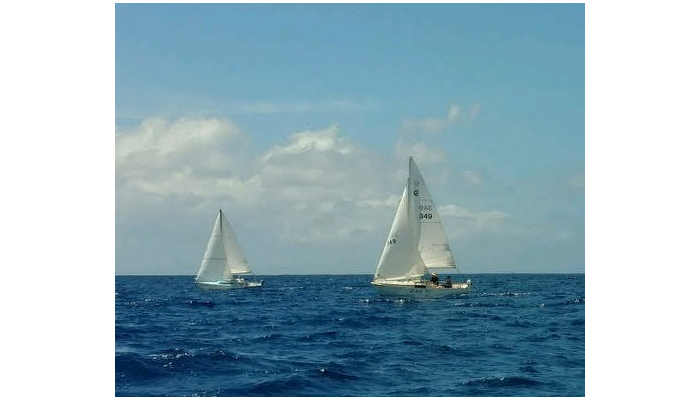 While we didn’t have as many boats on the start line as anticipated, we did have a great day sailing.  Only Four of the six boats signed in made it to on the start line.   Opihi had engine troubles and Quakers sailed out to the green buoy but then returned to the club since they still needed more rig tuning to be able to sail to windward on both  port and starboard tacks. 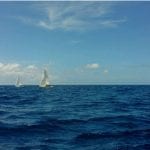 As with most of the races I have participated in this year, the wind seemed to be building as we neared starting time, even though, we decided to keep the #1 on.  We headed up to the windward mark to check for current/drift and then headed back to the start/finish line to check points of sail.  As we checked in with the committee boat we noticed them pulling up anchor, not to move the start/finish line, but to retrieve the windward mark which decided to have it’s own downwind race, right onto the Kohanaiki shoreline!

Once the mark was retrieved the committee boat returned to it’s line, albeit a shorter start line and not as square to the wind as the racers would have liked.  With no windward mark, course 7 was the call for the day.  While none of us had a stellar start, except Mana Hae we all made it over with a tack or two from the pin end. 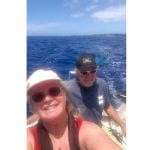 Heading out towards sea to look for a layline to the green govt buoy, Mana Hae was out in front, followed by Mahina Pua, Miss Bahavin, and Wind Fire.  For a period, it seemed like Wind Fire was catching Mahina Pua as they sure were pointing well.  From what we could see, the other pleasure boats out sailing may have given Wind Fire some dirty air and that set the fleet up to round with Mana Hae out front followed by Mahina Pua.

With Miss Behavin farthest inside the fleet, and closest to the dangerous reef, the lifts were enough to set them up to round the mark just ahead of Wind Fire.  Once around Mahina Pua watched the lead boat Mana Hae and hung just behind them, slowly gaining on them.  Miss Behavin and Wind Fire held their places respectively.  As Mahina Pua approached the finish line, they we able close the gap, and even sit on Mana Hae’s air just a bit to further lessen the distance.  Mana Hae took line honors with Mahina Pua finishing 21 seconds behind them earning a bullet on corrected time.

For the second race we lost one boat as Mana Hae headed back for a pleasure sail and the remaining boats fought it out.  The second start didn’t reveal any particularly stellar tactics with all three boats late over the line again.  With a similar course all the boats repeated the same tactic.  Once over the line the three boats headed out to sea again shooting for a layline.

First to tack was Miss Behaivin, then Wind Fire went, and last was Mahina Pua.  With all three boats on starboard tack, it was a march down to the green buoy.  Typically this course is bit of a drag race, but today was rather enjoyable with a decent breeze and not too confused seas.  Once around the mark, Mahina Pua was leading with Miss Behavin and Wind Fire right behind them.

Either the wind shifted more west, or the tactics were drastically different, but Mahina Pua was able to turn down towards the mark more gradually and with more speed rather than bobbing towards the mark once inside the reef.  With line honors, Mahina Pua circled around to watch the remaining two boats finish their race.  Before sailing back we threw the crew into the water to cool off and enjoy some swim time.  While more boats would have made the race more interesting, it’s safe to say we all enjoyed a pretty epic day of sailing in Kona.

Thank you to all that joined us for KSC 9-8-19 sail day, and extra mahalo to the race committee and the grill masters!

Next race is Sunday Sept 22nd, if you would like to join us as crew on a boat please comment on FB or contact the club directly (the only experience necessary is a good attitude and willingness to learn).  If you are looking for crew, please arrive early at the club and ask around!

(EDITORS NOTE: I’ve removed Brads contact info from the post, please use the contact form on the site to reach out to Alicia if you’d like to get in touch with him.  Don’t want a bunch of spam bots to start bugging him)

There are no upcoming events at this time.