Talk Story with the Commodore…aka…. The Fish Whisperer

Last Saturday was our Bud Loves Fishing Tournament and Summer Party so we decided to take the committee boat out for a spin and see if we could hook anything.

Bob K spent several hours the day before at the Harbor House getting the lowdown on where the fish were running and no doubt enjoying a few frosty ones in the process. Saturday morning arrived and myself, Vice Commodore Joe, Kim S and Bob all met at the club, bright eyed and bushy tailed, ready for a day of fishing.

We launched and headed off around Kaiwi Point, but no luck, not a sniff of a fish so a change of tactic was in order. We turned north and headed up the ono lane, the forty fathom line running up from Kaiwi point to Keahole.

Nothing seemed to be biting so Bob suggested handing the helm to the ‘fish whisperer’…a little back story here, my one and only other time fishing, Bob and Joe spent a couple of hours trying to catch something and not even a nibble, I took the helm and within ten minutes, fish on, a 20-30lb ono, the only fish we caught that day…back to last Saturday…Joe handed the helm over to me and fifteen minutes later, boom, fish on.

The boys were at the front not paying attention so I yelled fish, fish,fish whilst apparently doing a little dance and hand wave much to the amusement of the others. The boys sprang into action reeling in the other lines and then Bob began reeling in the fish, he did offer to let Kim have a go, but in her words she would much rather just ‘sightsee’.

As it got closer to the boat we could see that it was an ono, at little smaller than the last time maybe 15lbs. Once it was on board and bagged we turned south for another run and then headed out to the buoy offshore to see what else we could catch, but alas it was a one fish day for us so we headed back to shore, ready to party. 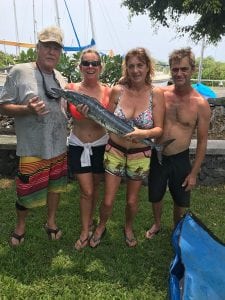 Bob, Kim, The fish whisperer and Joe with the winning fish 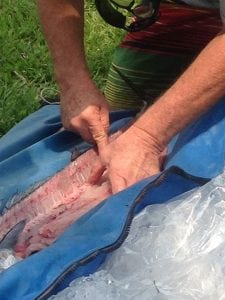 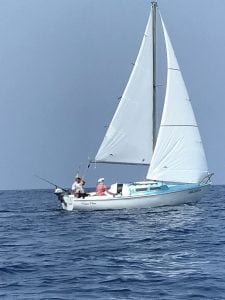 Mano Hae back on the water again. A fitting tribute to Bud